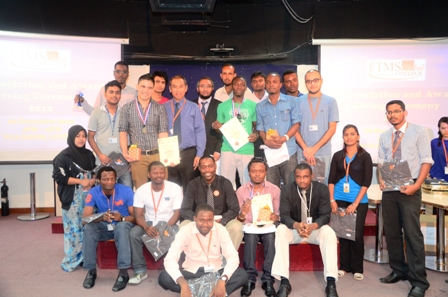 FTMS was organized a ceremony for giving an award for those who succeed in their participation. Student Service Department as an organizer was proud to organized this FTMS Appreciation and Awards Giving Ceremony 2012, was held in VC Room, Level 5.

The event started at 4.00 pm. Anbarasi belted out speeches as joint MCs’ for the day. The Head of School of Accounting and Business Management, Mr. Zubair Hassan and Mr. Zainudin Johari as Deputy Head of Engineering and Computing Sciences come for give an award and prize to the student.

For student that attended the Meeting with KPT and Student Representative, also received their certificates. Congratulation to Shola Olaniyan, (President of Student Council) and Norfaradilah Binti Abdull Salleh, (Secretary of Student Council) for their participation.

As appreciation for FTMS students and staffs, a random selection through a social network Facebook for winner of FTMS College Malaysia Facebook Survey. About 15 students and staffs received a Polo T-shirt and FTMS glad to say congratulation for all winners. The idea of FTMS College Malaysia Facebook Survey is to know the opinions by other in term of improving FTMS and what they want to have in FTMS Facebook it self.

At about 4.45pm, all guests were then invited to the cafeteria for evening tea. The event ended shortly after 5pm.