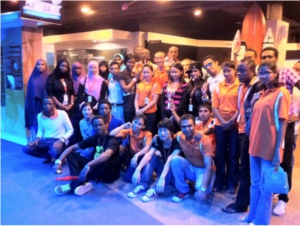 This report is meant for the head of English department Mr. Amuthan. It will give an account of our tour to the National Planetarium (Planetarium Negara) which is located at Jalan Perdana in Kuala Lumpur.

The trip was on 23rd of August 2011 and it was part of our extra-curriculum activities marking the end of the semester. We were led to the National Planetarium by the lecturers in charge of the Intensive English Programme namely: Mr. Amuthan, Ms.Khomaty and Ms.Anbarasi who are teaching Intermediate class, Pre-Elementary class and Elementary class respectively.

Indeed, there were 31 students including 10 from Pre-Elementary class, 7 from Elementary class,10 from Intermediate class and 4 from Advanced class. Also, to make our tour more attractive and fun, we had been accompanied by 3 children. We met each other at FTMS School at 8:00am and we moved to the Planetarium by foot at 9:15am.

After twenty five minutes, we arrived at the National Planetarium .We registered at the counter and we got place into a space theater which screens shows and large format film. Before the film started, they gave us the regulations of the space theater and the film we watched was mainly related to space science. Through that film, we were able to understand how NASA launched their first rocket to the moon and how they found it to be. After the show , we moved other places like the space science exhibits, viewing gallery and Observatory Park where we had seen the names and the photos of the persons who went to the space, and also those who were operating in astronomical field. Finally, we visited most of the devices used by astronauts such as the things they wear to support their breathing system and some other equipment.

After an hour and fifty minutes in the National Planetarium, we finally left at 11:30am with all students and the lecturers back to FTMS COLLEGE at 12:05pm.

I cannot conclude this report without thanking the organiser for their support and hospitality. Also, I would like to thank all participants for their good behavior observed during the trip and we hope that next trip will be more enjoyable with more participants. I really appreciate for a fruitful and indeed activity organised by FTMS ,School of English. The credit goes to the lecturers.